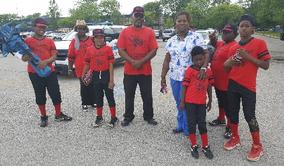 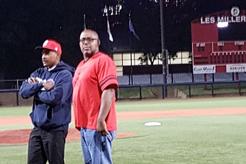 The Phoenix Park District Brings Baseball Back To Phoenix

The year 2016 will go down in history for the Phoenix Park District. Little league baseball has been absent from the Village of Phoenix for several decades. However, with a grassroots effort led by Debbie Bartholomew, Lori Hagler and Wayne Ashford, the Phoenix Eagles baseball organization took flight. There was an overwhelming turnout at the initial registration party. Over 30 girls and boys between the ages of 4 and 14 turned out for the occasion. Because the main focus of the baseball program was to provide a productive outlet for the kids, the baseball organization continued to accept new players throughout the season, ending with over 40 players on three teams, t-ballers, minors and majors. The Phoenix Eagles do not yet have a home field, but due to the awesome networking of Coach Wayne, the Eagles played games throughout Chicago and the suburbs and were afforded the opportunity to play under the lights, at Les Miller field in Granderson Stadium, home of the University of Illinois at Chicago, (UIC) Flames baseball.

The Park District was also fortunate enough to purchase a minivan. In addition to providing transportation to games, having the van made it possible for the teams to experience practicing at fields outside of Phoenix, including the baseball field at Rainbow Beach and the batting cages in Alsip.

In addition to coach Wayne, the Park District would like to thank our t-ball coaches Brandon Hagler and Antonio Hagler, our team parents Shavon Carpenter and Angela McEntee, who were there every step of the way, park district Commissioners Mildred Garcia and Kelvin Smith, Deputy Chief George Bowman, Sgt. Ali and Inspector Warfield of the Phoenix Police Department, and Damon Muhammad for their contributions, the Village of Phoenix for allowing the teams to practice in the Multi-Purpose Center during times of inclement weather and all those who signed up to volunteer and gave of themselves to support our efforts in any way.